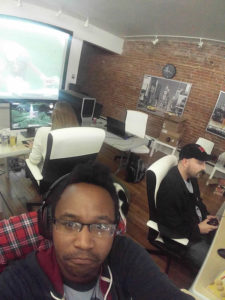 By Roxanne Rabich, Service Coordinator at Umbrella Managed Systems, talking about a recent LAN party at the Umbrella offices in the River Market area of Kansas City.

With the age of information sharing via the internet, we’re able to talk, share ideas and play games without leaving our bed, couch or computer chair. Obviously, this wasn’t always the case. Some of us at Umbrella have been in the field before the age of the internet and remember something called a LAN party. We got the idea of having a LAN party at the office.

Big kudos to Andrew Horner for having the idea, sending the invites and doing a lot of technical work to make the event happen.

What is a LAN Party? 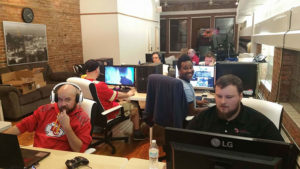 A LAN party is a gathering of people with computers or compatible game consoles, between which they establish a local area network (LAN), primarily for the purpose of playing multiplayer video games. The size of these networks may vary from the very small (two people) to very large installations of hundreds or more. These parties started before the internet could connect us like it does today.

Private LAN parties were at their peak in popularity during the late 1990s to early 2000s when broadband internet access was either unavailable or too expensive for most people at the time. The largest recorded LAN party as of 2013 was DreamHack in Sweden with 17,403 connected computers. (More on Wikipedia)

What do you have at a LAN party? 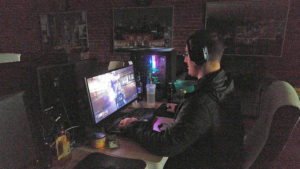 Lots of custom-built computers with LED lights and plenty of snacks. Especially energy drinks. We pooled funds to buy everything we needed to keep us going for a couple of days. All of this so that could spend hours and hours competing with each other, playing lots of multiplayer video games.

Can’t you do that without a LAN party?

Yes, you can play multiplayer video games over the internet, but you miss out on the camaraderie of physically being together. It’s not as much fun to have dinner with someone via Facetime or over a web cam. And celebrating the fact that you beat your friends in a game is much more satisfying in person.

The Umbrella LAN party weekend was a big success. We had twelve members of the Umbrella team, along with other friends and some of our family members showing up. Some people even slept here! There were plenty of exotic computers with cool cases and blinky lights. We had two full-room, virtual reality setups for people to experience some of the bleeding-edge technology on the market. And we bonded as a team… which was the main reason to have the LAN party!