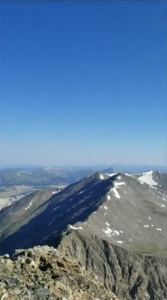 Northwest of Alma, Colorado there are a series of four mountain peaks that make up the Decalibron series, Mt. Democrat, Mt. Lincoln, Mt. Cameron, and Mt. Bross. Five of us from the Umbrella family set out to conquer this series of mountains in July!

Trent Peters, Heath Stover, Curtis Bagnall, Kyle Barry, and Nicholas Stebbins, met up in the Umbrella parking lot to set out on our adventure. We were pumped! There was nothing but highway keeping us from starting our mission. After hours on the road and a few windmills later, we stopped at Heath Stover’s hometown, Colby, Kansas. We stretched our legs and grabbed a burger from the B Hive and made a bee line to our “home” for the next few days, in Keystone Colorado.

The view in Keystone is breathtaking. Mountains, lakes, beautiful sunsets, and the friendliness of the people there, are amazing. We settled in and began our elevation acclimation. Keystone’s elevation is just over 9,000 feet, about 8,000 feet higher than Kansas City. This is still about 5,000 less than all of the Decalibron peaks, but we all felt really good! Still pumped, we decided to hike the Decalibron series a day earlier. The day prior to our hike, we navigated downtown Breckenridge, visited restaurants, and checked out the Breckenridge distillery. We checked in early and packed our bags in preparation for our upcoming domination! 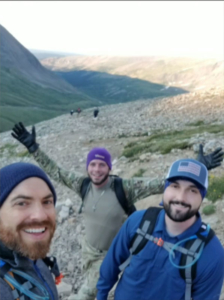 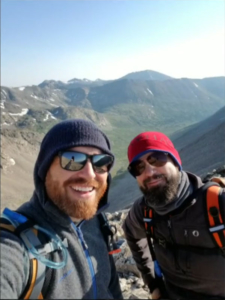 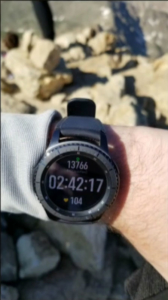 Apparently, at about noon, rain and snow tends to overtake the peaks of the mountains and makes them unsafe to hike. To avoid this, we headed out at about 4AM, and made the treacherously bumpy trip up to the Kite Lake Trailhead at 12,000 ft. At this point, we were met with two options. We could trek up Mt. Democrat and make our way across and finish at Mt. Bross or the exact opposite. Luckily, we had made friends with a fellow KC native that had just completed the same hike, days earlier. She recommended that we start with Mt. Democrat due to the slippery slate that covered Mt. Bross.

The first 1,000 feet up in elevation was a breeze and we were setting a good pace. Then, we hit 13,000 feet. The air was noticeably thinner, and our pace significantly slowed. The Colorado locals made it look so easy! After a couple of hours, lots of sweat, a lack of oxygen, and a lot of team encouragement, we made it to the peak of Mt. Democrat, at 14,154 ft. We took pictures and were taken back by a view that is indescribable! During the careful hike down, Curtis and I started to feel the full force of the altitude. We buddied up and continued down. Heath, Trent, and Kyle made their way across the other three peaks as our Umbrella Champions.

We conquered the Decalibron loop!

Want to see a video of our summit? Check it out here: https://gopro.com/v/N0N7gaRJpbR2 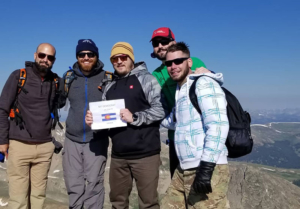