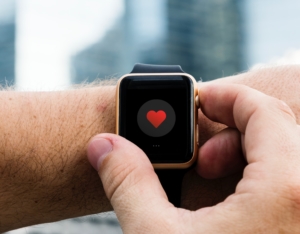 The Apple Watch Series 4 was recently announced at an Apple Special Event earlier this week. Heralded as a “fundamentally redesigned and re-engineered” product, the updated device includes several features that push the Apple Watch further into the healthcare landscape.

Emergency SOS allows for quick access to emergency services. When enabled, the services will call 911, notify any pre-selected emergency contacts, and include information about your current location. Additionally, the cellular version of the Apple Watch Series 4 can use the Emergency SOS feature even if your Watch is not actively paired to your phone.

According to Apple, an updated accelerometer and gyroscope allow the Apple Watch to detect when the wearer has fallen. A notification appears on the screen, asking the wearer to enable the Emergency SOS feature or dismiss the alert. If the wearer remains unresponsive for 60 seconds, the Watch makes the Emergency SOS call automatically and messages the wearer’s emergency contacts.

By far the most talked about enhancement to the Watch is the new integrated ECG. Electrodes built into the Digital Crown and the back-crystal work together to read the electrical signals of a wearer’s heart. By touching the Digital Crown with a finger and waiting 30 seconds, an ECG waveform is generated. The data can indicate if a wearer’s heart is beating in a normal pattern.

When the feature was announced, Apple Chief Operating Officer Jeff Williams said the company received FDA clearance for both an atrial fibrillation-detecting algorithm and the ECG components.

How It Ties Together

Everything considered (an ECG on your wrist, low and high heart rate notifications, fall detection, and enhanced Emergency SOS features), the new Apple Watch Series 4 is another example of the power of technology breaking through the confines of a hospital or physician’s office – enabling patients to track and observe their health status actively.

However, as one Reddit user wrote, “…the new Apple Watch looks like a great tool, but it is not meant to be a medical grade device and not a substitute for medical and professional evaluation in the case of symptoms.”

The technology is an exciting tool available to patients and providers, but patients should continue to rely on the clinical expertise of healthcare providers.

More information is available in an article from Healthcare IT News or the Apple Special Event announcement.